Ever wonder how big game – shot in the vast American wilderness – gets brought all the way back to civilization?

I recently visited a Cabela’s that just opened in our town. For the uninitiated, Cabela’s is easily the most expansive and comprehensive hunting, fishing, outdoor-gear store on Planet Earth.  They’re basically a small city with a roof.  Along with every gear component you can imagine, they have an eye-popping display of stuffed animals in the center of their store. 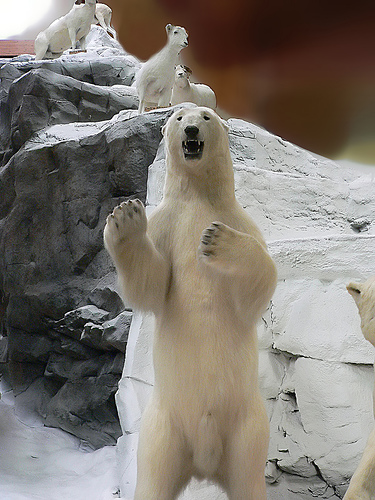 By “stuffed” I mean taxidermied.  So we’re talking, real, wild, once-alive animals now stuffed and posed to look alive.  I have stuffed animals all over my house, but none of them ever had teeth or laid claim to primordial carbon.

Personally, I’m not much attracted to killing animals of the natural world, and stuffing them and putting them on a wall isn’t very interesting to me, either.  In general, this city boy thinks of taxidermy as nothing more than bald carnivorism on guiltless parade.  Who ever thought the severed head of a deer, garrishly hung from a wall, would serve as decoration?  Isn’t some version of humility or mourning in order for this kind of thing?  If I were a taxidermist, I would recreate the entire scene, complete with twisted, exposed entrails, horrid death-grimace, contorted body and spattered blood in wide, fan-shaped arrays.  And every display would always include the GUN that did the dirty work.

Anyway, these guys have HUGE bears stuffed and in fierce poses with claws bared.  This includes a real polar bear, over 8 feet tall.  Somebody killed a freaking polar bear! I thought we just studied those things.  Staring up at that ginormous carcass, I wondered first where the hapless thing had been shot (heart?  head? gi tract, perhaps?), then ruminated on the ethics of such an action, then wondered how the freaking hell they carried an object that huge out of the woods and into my Cabela’s.

Today I saw a patient with back strain who encountered a similar problem.

“Oh?”  I replied, trying very hard to be interested in yet another low-back pain problem.

“Pulling a bear out of Porter Crick.”

I looked up, interested without trying now.  “Like, a bear? You mean with claws and fur and omnivorous urgings and the hibernation thing?  That kind of bear?”

“Yep.  Reared up while we were deer-hunting.  Stood about 6 feet.  Took him down with one clean shot.”

“Holy crap!”  Oops.  Professional, professional.  Be PROFESSIONAL, stuipd!  “Jeez, how’d you get him out of there?  And, on a non-medical note…were you a little worried about getting your face swiped off?”

“Yeagh.  Poor bastard was coming right for me.  About 50 feet off.  He had a bee up his arse for some reason.”

“Me and Jake field dressed ‘im,”  I nodded approvingly at this…I can only imagine what the heck it really is…maybe try wikipedia later.  “Then we dug some motorcycle straps outta our packs and pulled the critter by his paws.”

“You pulled him by straps from his paws,” I repeated, acting normal but thinking of No Country For Old Men. “How far?”

“Pretty much nothing, dude!  Anybody carrying a 400 lb. bear out of the backcountry is going to have back pain.  And I doubt you’ll listen to me telling you to rest it, right?”

“Wahl I was only comin’ in today because we leave for some elk hunting in Idaho in 2 days and I wondered if you could give me something to help with the pain before I go.”

“If you want to stand across the room, I’ll shoot you with one of those tranquilizers they shoot into elephants on the nature channel.  That might make you woozy, though.  It might affect your ability to shoot safely.”

One thought on “Pullin’ Bear”